Need a one-stop solution to help everyone communicate your brand consistently across channels? Check out Lytho, part of inMotionNow!

More than Ever, Creatives Need Space to be Creative

Remote work may be interfering with the creative process. That’s according to bestselling author Martin Lindstrom, who has written books like Buyology and Brandwashed, in an interview with Ian Burrell for The Drum.

In a piece titled, The creative curse of Zoom? How remote working is taking a toll on adland talent, Martin says, a “new culture of video conferencing and home working is sapping the energy.”

The environment has left creatives fixated on calendars and eliminated the “water cooler moments” amid an endless stream of video calls. As a result, “creatives have no space to think and ideas are being strangled by corporate culture.”

His observation is spot on, and in fact, there’s evidence to suggest this issue existed before the pandemic. For example, the 2020 In-House Creative Management Report, which surveyed more than 600 creatives and marketers found about half (47%) of creatives still spend about one full day per week on administrative duties.

That means things like chasing details because that impromptu email requesting a creative project was incomplete. Or following up with a requestor because they haven’t reviewed or approved a proof that’s been in their inbox for a week.

Those administrative tasks take up the time and space, which creatives could otherwise spend doing what the business hired them for: being creative. 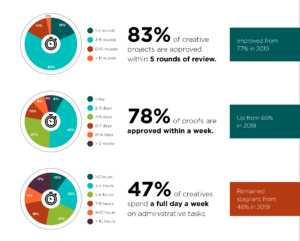 The results of that survey were published early last year, just as the Coronavirus pandemic was beginning, and before the meteoric rise of Zoom, which underscores the point, this is a longstanding challenge. In addition, the 2019 version of the same survey came to a similar conclusion (48% spend about a full day per week on admin tasks).

To business, this may not seem like a problem, until you look at what the business is asking of their creatives. According to the survey, the top challenges facing creatives are:

So, creatives have long struggled to gain the space to be creative, even as businesses are asking them for more work under tighter deadlines. It’s likely been accelerated by video calls and the culture of remote work rather than a result of it.

In both cases, the key is to provide creative teams with the right tools and technology to efficiently manage and report on the creative process.

“It’s really important for teams to track as much of their work in a system that is their single source of truth,” wrote Kim Conder, a brand marketing consultant who has managed in-house teams, in the report. “Once you start doing that, you’ll start to see patterns that you would never see if you weren’t tracking your work.”

Learn more about creative workflow management can help make more space for creativity by scheduling a demo of inMotion ignite.

Elise Hauser is a product and content marketer with a passion for telling brand stories. She has produced inMotionNow’s annual Creative Management Report for 4 years, webinars, content sessions for major industry events reaching audiences of 11,000+, and of course, countless blog posts. When Elise isn’t writing about the marketing and creative industry at inMotionNow she is teaching economics and hanging out with her cat, Tucker, at her home in Raleigh, NC.

Tame the Chaos of Constant Output to Achieve...

Adopt a Human-Centered Mindset to Give Creatives What...

Is Your Creative Process Working for You? How...